For a restrained thermal expansion jointed track formed by long rails the full temperature cycle will be defined by 14 main stages presented below.

The main assumptions of this calculation are:

The stage drawings show the thermal force diagrams, the force distributions on the rail, the formulas and the calculation results for all the stages discussed in this example.  The compression forces are represented conventionally above the reference line while the tension forces are shown below. The joint gap variation is calculated considering the expansion or contraction for both rails of the joint. This is based on the thermal linear expansion equation, taking into account the evolution of the resistance and thermal forces from one stage to the next.

During the full temperature cycle, the track will pass through the following main stages (Radu – 1975): 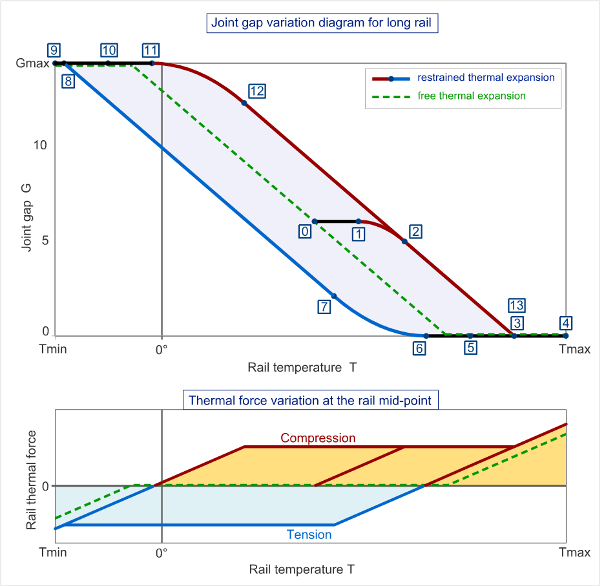 The theoretical ideal evolution of the rail thermal forces throughout the temperature cycle is also shown in the figure second graph. Compared to a free thermal expansion track, the thermal forces of a restrained track are significantly different and also define a range within which the rail forces can vary.

A more detailed description of this calculation will be published in the next issue of the Journal of the Permanent Way Institution.

Join 1,536 other subscribers.
My Tweets