The track buckling happens in hot weather because of a multitude of factors but it is massively influenced by the track longitudinal and lateral resistances.
Both these resistances have three levels of action:

Figure 1. The three levels of track lateral and longitudinal resistance

– between rail and fastening – at this level all the modern fastenings are behaving very well if they obey to the limits established by the fastening design norms. The European Norm EN 13481 (Performance requirements for fastening systems) is generally used in Europe and assimilated around the world due to the Europe-based main fastening providers – Vossloh and Pandrol.

For modern fastening systems the bucking will never happen at this level; the rail will not unclamp from fastenings and buckle.

For old fastening systems – the ones that were using spikes or crampons to fix the rail in place – a proper clamping force is not constantly provided and in this case the buckling might happen at this level, firstly as a vertical buckle wave that will free the rails from fastenings, followed usually by a lateral buckle.

So using modern fastening is a method to prevent and avoid buckling.

Track buckling in New Zeeland due to an earthquake (September 2010). Image source.

Once the lateral resistance at this level has been overcome, the rails/sleepers frame moves thorough the ballast, looking for the post-buckle equilibrium state.

Most of the methods to mitigate the buckling risk are focused on increasing the resistance at this level. For the ones above the solution is simple and easier to manage and control.

Figure 15 below (taken from AREMA) presents how the track buckling probability varies dependant of the level of lateral resistance: 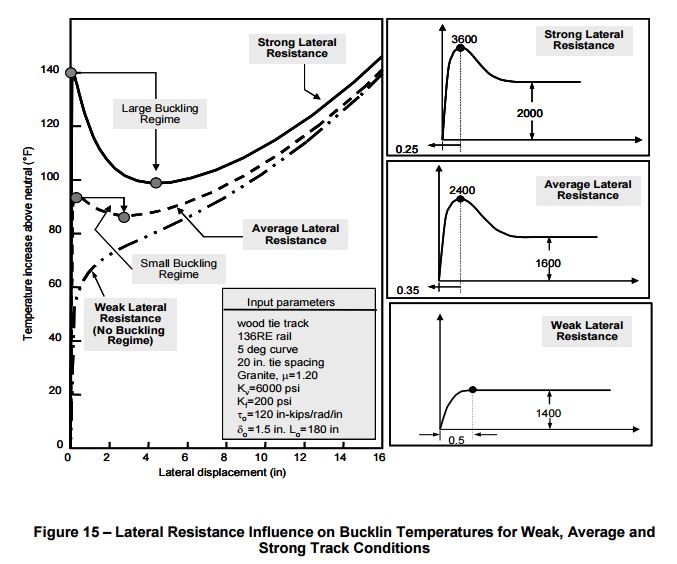 A few ways to do increase the lateral (and longitudinal) resistance between railway sleeper and ballast are:

a. increase the ballast inner resistance and it’s interaction with the sleeper

b. change the sleeper or improve its interaction with the ballast

Other things that can and should be done to prevent railway track buckling: