In the previous article, Jointed track breathing, was described for jointed track the complex activation phenomenon of the track resistance forces that oppose to rail thermal length variation. In the case of the jointed track this activation takes place on the entire length of the rail.

As the rail length increases a greater temperature variation it is required to activate the track resistance forces (the joint resistance and the track longitudinal resistance).

If this length is big enough a different element will appear – no matter how much the rail temperature will vary, within the normal annual rail temperature range, the track longitudinal resistance will not be activated on the entire rail length.

The length on which the mobilisation of the track longitudinal resistance takes place is called stress transition length (or breathing length). This length will vary its length and will be characterised by a variable axial force (see the diagram below – not to scale). 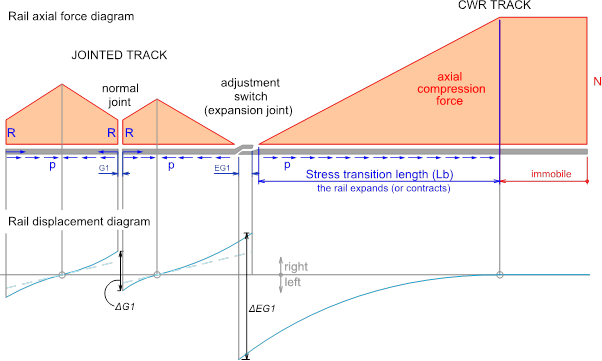 Based on the axial force variation can be computed the rail displacement on each section of track, including the gap variation for jointed track (ΔG) or of the adjustment switch (expansion joint) placed at the transition between the CWR track and the jointed track (ΔEG1). Both these types of gap variation will have their own specific delayed response to rail temperature variation – similar to the one presented in the article about Jointed track breathing.

Outside this stress transition length, the rail axial force caused by temperature is constant – N – and the rail on this area is practically immobile, fixed. From this perspective most of the railway track administrations around the world define as Continuous Welded Rail (CWR) track that track arrangement on which the immobile central zone exists throughout the annual rail temperature variations.

If this fixed central zone does not exist, the rail – even though might be very long – is still behaving as a jointed track rail.

Only if the immobile central zone exists, the rail axial force N over this area can be calculated relative to a reference rail temperature for which the rail stress is null. This reference temperature is called Stress Free Temperature (SFT).

Graphically, for this track the peak seen on the jointed track rail axial force diagram does not exist.

Dependant on a wide range of factors, in temperate climate countries, the maximum possible stress transition length is in the range of 90-130 m. The immobile central zone is considered to be the minimum normal rail length, around 10 m. This means that, considering this definition principle, a long welded rail track can call “CWR track” if its length is above 200 m. Below this generic figure, but significantly dependant on local factors, the track will behave as a jointed track and will not have a central zone of constant axial force N, computed based on the physics equation: N = αEA Δt°.

The first figure and corresponding explanations were changed based on the received comments.

2 thoughts on “CWR track definition. When is the track not “jointed” anymore?”