Around 140 people were injured and 79 died. Data from the train’s black box revealed that before the start of the curve the train was travelling at 195 km/h (121 mph), and despite the emergency brakes being applied, was still travelling at 179 km/h (111 mph) when it derailed four seconds later. That was more than double the speed limit for that curve, which is 80 km/h (50 mph). (source: Wikipedia)

On 14 November 2015, a TGV train derailed in Eckwersheim, Alsace, France, while performing commissioning trials on the second phase of the LGV Est high-speed railway line, which was scheduled to open for commercial service five months later. The derailment resulted in 11 deaths among those aboard, while the 42 others aboard the train were injured. It was the first fatal derailment in the history of the TGV and the third derailment since the TGV entered commercial service in 1981.

Both these tragic accidents happen because  of rollover derailments caused by excessive speed.

The vehicle rollover derailment happens when passing on curves, if the resultant of all the forces (or accelerations) acting on the vehicle, is projected outside of the support zone. 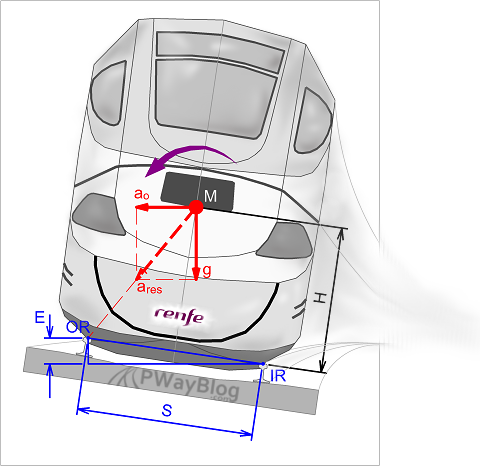 A theoretical rollover speed can be calculated for this unstable equilibrium state. This speed is dependant on the H/S ratio, where H is the height of the vehicle centre of mass and S is the distance between the wheel/rail contact points.

The graph below shows the theoretical rollover speed, dependant on radius and the H/S ratio. This is based on a simple calculation and ignores the influence of vehicle suspension – which allows the vehicle to sway and potentially cause the rollover at a lower speed than the one shown in the graph. Other factors can also significantly influence the point/moment when the vehicle is reaching this unstable equilibrium state – lateral winds, vehicle tilting mechanisms, etc.

The influence of cant is shown by the reference lines defined based on the E/S ratio – E being the cant.

For the 400 m radius at the Spanish accident (Santiago de Compostela), this maximum speed is 80 km/h; despite the fact that the Spanish gauge is wider -1668 mm – the limits of un-compensated accelerations are equivalent.

For the French accident (Eckwersheim) the maximum speed is around 145 km/h – the high speed limit of 176 km/h indicated in the quoted Wikipedia article is for tilting train, which allows a higher cant deficiency. EN 13803-1 gives a normal limit of 275 mm for the tilting train cant deficiency. If the curve has a 150 mm cant, the cant deficiency for 176 km/h is 237 mm, within the limits of the European Norm and probably the maximum allowed on the French high speed railway line.