(a prelude to a proper design guidance)

Non-linear transitions and their use in alignment design

There are two types of transition curves from the point of view of the curvature variation:

The main disadvantage of the linear transitions is the abrupt appearance and disappearance of the unbalanced lateral acceleration variation at the ends of the transition.

The significance of this abrupt change increases with the squared speed affecting the riding comfort and causing inertial response forces that are affecting the track. The use of non-linear transition is considered the best alternative to avoid this issue at high speed.

The pioneer was Japan, where the cosine (half-sine) transition was installed on the entire Tokaido Shinakansen line; the first section of 500 km was opened in 1964. Currently on all Shinkansen lines cosine transitions are installed on all sections with the speed greater than 60mph.

In France, a hybrid solution is installed on both TGV and conventional speed lines. The transition curve used in France is the clothoid, but a short non-linear transition called doucine is applied at the ends, smoothing the curvature variation. These doucines are applied also for the cant variation. Their length are 40m for TGV lines and 20m for conventional lines (Alias – 1984). The use of these doucines was first standardised on SNCF lines in 1968. A similar approach can be found in several other countries where the Railway infrastructure was developed with French guidance and influence.

Although the clothoid transition is the transition curve generally used around the world, different high speed railway administrators have established speed limit for its use, above which the non-linear transition are installed. For example on the Japanese Shinkansen and Taiwan HSR this limit is 60mph. On the Californian High Speed line this limit is 100mph (TM 2.1.2 – 2009).

The Handbook provides indicative data, useful in the design process, but there are still a few elements to be added to provide accurate design guidance.

The equations for cant gradient, rates of change for cant and cant deficiency and other essential information are still needed in order to provide a good design solution, when using the Bloss transition.

A path towards a design approach is presented below. Some suggested additions to the Track Design Handbook are also included. The reader should be aware that all the formulas presented in this article refer only to Bloss (or clothoid – when mentioned) and should not be generalised for other non-linear transitions.

The main equations governing the Bloss transition are:

This curvature gradient has a parabolic variation (see fig 2) with a maximum value 1.5 / (RL) at the middle point of the transition. 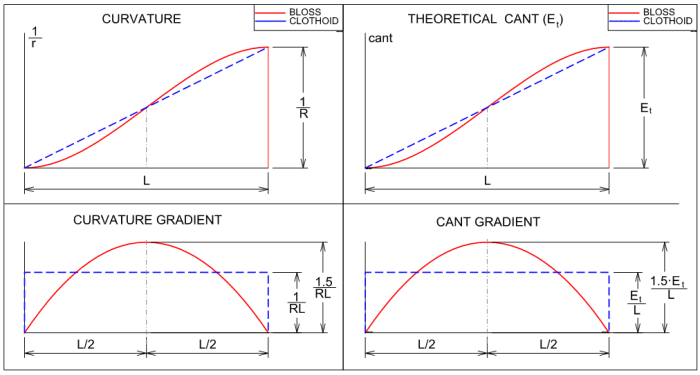 Fig 2. Curvature and curvature gradient for Bloss and Clothoid

Comparing graphically the curvature gradient of the Bloss and the Clothoid (Fig 2) it can be noticed that for the same length L, the Bloss curve has the maximum value 50% higher than the constant value for the Clothoid.

Because of the direct relation between cant and curvature, the same variation will be encountered for the theoretical cant Et .

Although the maximum value for cant and curvature gradient are 50% of their equivalent for the clothoid, it can be proven that the average value of these parameters are equal to the ones of the clothoid.

The main difference (from track design perspective) between the two types of curves can be observed in figure 3 – the sudden appearance and disappearance of curvature gradient  at both ends of the clothoid compared with the Bloss smooth variation, starting and ending in null. This is, in a subtler way, similar to the difference between a curve without transitions and one with transitions. 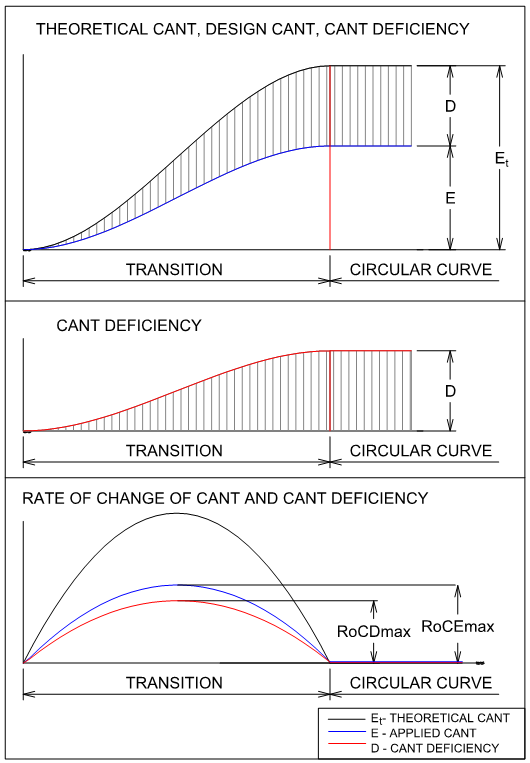 The rates of change both for cant and cant deficiency are not constant over the transition length. They will have the maximum value at the middle of the transition.

The evaluation of these design parameters and the choice of the minimum length of the Bloss transition should be based on B1.1 – B2.4 design rules from Handbook 2049.

In order to understand the difference between the Bloss and the Clothoid rules, let’s compare the rates of change of cant deficiency of both corves for different lengths of the Bloss. 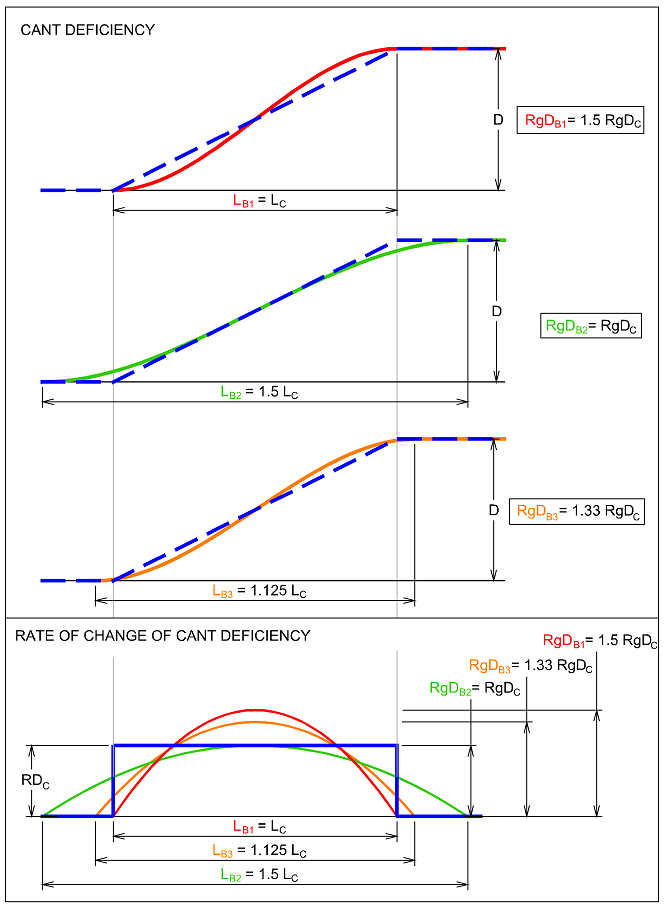 Fig 4. Bloss rates of change of cant deficiency in relation with length.

Applying the formula for the maximum RgD of the Bloss in relation with Lc, the length of the clothoid, we have three cases:

In this case the rates of change of the Bloss are 50% higher than the ones we know for the clothoid.

In this case the Bloss in 50% longer than the equivalent clothoid.

As it is not practical to use longer transitions and also due to the fact that that specific maximal value is at the middle of the transition but decreases significantly along the Bloss, in Handbook 2049 a 33% increase in Normal and Maximal Design Values for the rate of change of cant deficiency.

In this case the Bloss curve is 12.5% longer than the clothoid for the equivalent (33% reduced) rate of change.

No allowance is provided in the standard for rates of change of cant and the minimum cant gradient it should still be 1:400 for all the transition curves.

Based on these three conditions, the minimum length of the Bloss can be computed and used in the design.

Obviously, there are still other elements to be consider in the design with Bloss. But I hope a glance into this was provided above.

A more detailed design approach, including some suggested additions and amendments to the Track Design Handbook (NR/L2/TRK/2049), will be included in a future PWI Journal article.