There are two types of railway track superstructure from the point of view of the response to rail temperature variation:

BR2 baseplate with Macbeth spring spike anchors. A fastening system which does not provide longitudinal resistance. 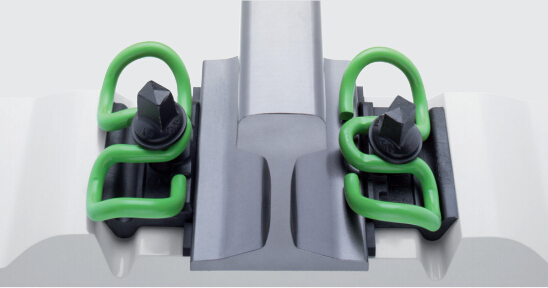 For this type of superstructure there are two main resistances that oppose the rail length thermal variation:

The joint longitudinal resistance will not allow the joint gap to vary until the temperature variation will cause a thermal axial stress that will overcome this resistance. After this happens, the joint gap starts to vary and the next set of superstructure elements comes into place to resist rail expansion or contraction.

The track resistance to the longitudinal and lateral rails tendency of movement, under the action of these forces, is secured through the action of the rail fastenings and the constraining effect of the boxing ballast. 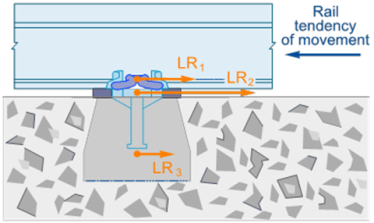 The track longitudinal resistance, LR, has three levels of action:

1. between the rail and the fastening – LR1

The fastenings for high speed track (V>250 km/h) the minimum longitudinal resistance is 9 kN (around 15 kN /m of rail).

Special fastening systems are sometimes required on very long bridges with direct fixing, or in other specific cases. These fastenings can provide reduced longitudinal resistance (LR1), to separate the thermal expansion forces of the track from the ones of the structure. A well known such fastening system is Pandrol Zero Longitudinal Restraint (ZLR).

2. between the fastening and the sleeper – LR2

3. between sleeper and ballast – LR3

The Track Longitudinal Resistance is the minimum of the three ( LR1 , LR2 , LR3 ) and the movement due to temperature variation will manifest at the level of that lowest resistance.

For ballasted track, there is this relation:

Usually the thermal expansion will hence manifest between the sleeper and the ballast. As the rail expands or contracts, it will carry with it the sleepers, moving them slightly back and forward through the ballast. If the ballast is frozen or there are other reasons that provide higher resistance at this third level, then the rail will start to move in relation to the sleeper.