There are three types of versines used for the track realignment and rectification methods (Radu, 2003): 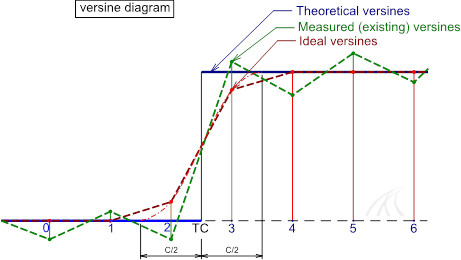 The theoretical versine on a transition curve is:

The versine change dv between consecutive points along the linear transition curve is:

As the name suggest, this type of versine is theoretical, computed presuming a certain chord length but without making any chord offset measurement on the ideal, nondeformed track. 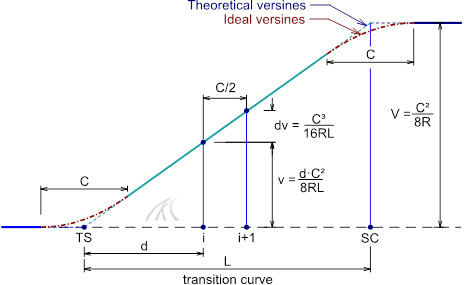 This versine is the same as the theoretical versine if both ends of the chord are on the same geometrical element (straight, circular curve or transition curve).

In the vicinity of the points where the curvature variation changes, the ideal versine is different from the theoretical versine. In the figure below, when measuring the versines for points 2 and 3, the chord is placed on two different alignment elements. 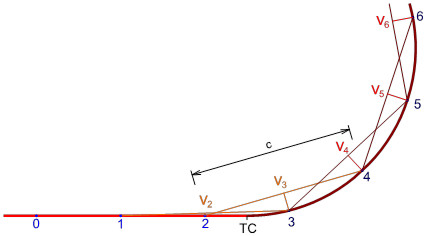 To measure the versine for point 2 the chord is placed between point 1 – on a straight – and point 3 – on the curve. Although not clearly visible in the figure, there is a versine V2 despite the fact that point 2 is actually on a straight, hence the theoretical versine is null.

Similarly for point 3, which requires the chord to be based on point 2 – on the straight – and on point 4 – on the curve? The versine V3, measured to the chord 2-4 is not equal to the circular arc theoretical versine.

Below is another example for a compound curve.

When doing a realignment or rectification design using Hallade or other methods, the resulted versines are checked against the ideal versines and not the theoretical ones. If the track lining is checked on site, the measured versine should always be checked against the ideal versine. If the versine of a point on a straight is checked by placing the chord on the adjacent curve it is normal to get, even for an ideal track, a non-null versine.

In the Hallade realignment method (Ellis, 1998; Noblet, 2003) the ideal versines at the start or end of a transition are computed by the following rules:

The justification for these rules will be presented in a future post together with the equations to be considered when the transition curve has an arbitrary position relative to the half-chord points.

Noteª: In some railway literature the labelling of the “theoretical” and “ideal” versines is the other way around – the versines measured on the ideal track are called “theoretical versines”. In fact that’s the way I’ve learned them also. But I chose to use the above way of defining them because it seems now more logical to me.

The reader familiarised with the other way of defining them is politely asked to excuse this labelling change which does not affect the essence of the subject:  three distinct types of versines – one which is only the result of a mathematical formula and the other two measured on track – either ideal and without irregularities or real, with irregularities and implying also measuring tolerances and errors.

6 thoughts on “Types of versines used for track realignment methods”