The measurement and analysis of track geometry is carried out regularly by all the railway infrastructure administrators in order to obtain data from which the track quality is established and the maintenance can be scheduled (Cope – 1993). 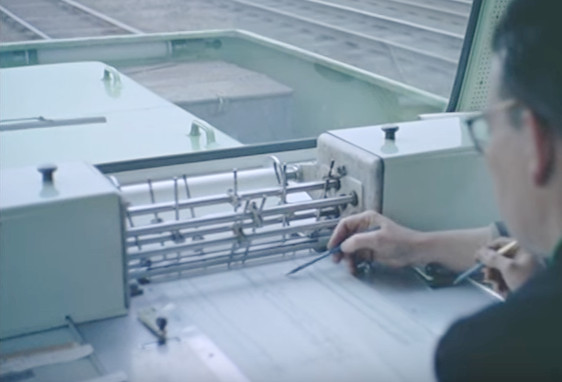 Historically, the use of track inspection cars can be traced back to the early 1920’s in France using the Hallade system which measured the vehicle reaction to track irregularities.  In 1933 Ernest André Mauzin (Mauzin, E. A. – 1939) produced in France a recording car based on the “chord offset” or “versine” system of measurement. This Mauzin track measurement car , sometimes called “Hallade”, started to be used all around the world and further developments were implemented by different railway administrators. In the late 1960’s it started to be replaced the inertial track measurement system. Nevertheless, the Mauzin (Hallade) measurement system, in a modernised form, is still in use today by some railway administrators, including SNCF. 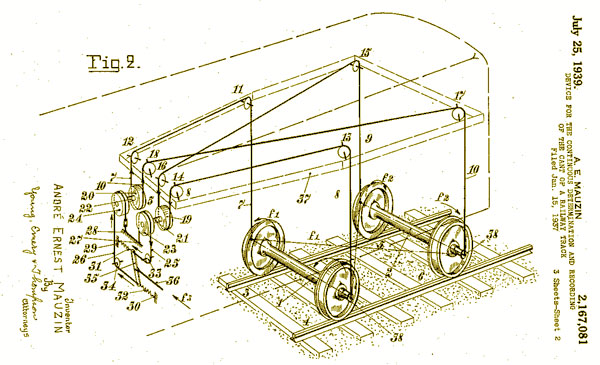 The measurement car had three bogies of which the central one was allowed to move laterally to a certain degree. To operate the measurement, this central bogie had cylindrical wheel tyres instead of the semi-conical tyres used normally on a railway vehicle.
The car was measuring versines (Horizontal alignment), levels, gauge and track twist.
This is a schematic example of a Mauzin system used to measure the versines:

And this is the one used for gauge variation – placed on the front or rear bogie:

A complex set of compound pulleys, springs and wires were used to convert the movement of the three bogies to a set of standard signals – very similar to the ones in use today.

For example, for versines this compound pulley conversion system was able to provide a converted versine value based on the position of the measuring bogie relative to the other two:

The compounded motion was recorded on paper relative to reference lines and well defined track defect limits. This figure shows the schematic for the survey of the gauge variation:

The result, drawn on scaled paper, was very similar to the one obtained today by modern measuring cars:

The track quality output was checked to evaluate the following:

Here is a youtube video of what it seems to be an inertial recording system, but called Hallade:

Join 319 other followers
My Tweets