If the temperature is increasing then the rail will expand with this ΔL. For example a 20 m rail, for a 30°C variance, will expand by 7 mm.

In conventional non-welded tracks the rails are connected by joints. These rail joints are designed with a joint gap to allow at least part of the expansion and contraction of the rails. This type of joints are called mechanical joints.

The railway track terminology is using the terms “long rail” and “short rail” to define the difference in behaviour of the track joints due to rail  temperature variance (Radu, C. -1999).

When a rail can be called “long”?

For every type of rail there is a standardised set of components and dimensions that defines the joint. The maximum joint gap, Gmax, can be computed based on this set.

In my post about the maximum joint expansion gap (click here to view this post) is presented the computation procedure and a few examples of British set of joint components and dimensions.

The two parameters, joint gap (G) and rail temperature (t°), can be displayed in a rectangular graph.

In this graph the joint gap varies from 0 to Gmax and the rail temperature varies in the range [Tmin, Tmax].
On this graph can be defined a reference rail length, Lmin, which will have the gap varying between the points A and D.
For the minimum rail temperature, Tmin, the gap will just open to Gmax (point A).
For the maximum rail temperature, Tmax, the gap will just close to 0 mm (point D).
In both cases, no rail stress will be transferred through the joint and the axial rail stress is presumed null.
For this specific case, the tangent of the line AD is 1: α Lmin. This tangent defines the thermal behaviour of any rail of this specific length.

The rail length Lmin can be computed from:

As we seen previously, this reference rail length, Lmin, is defining a limit for the joint behaviour.

For any rail shorter than Lmin, if installed correctly, the joint will never close to 0 or open to Gmax (see the figure below). Also, theoretically, for such a rail length, there will never be any axial thermal stress in the rail.

This type of rail length is called short rail. 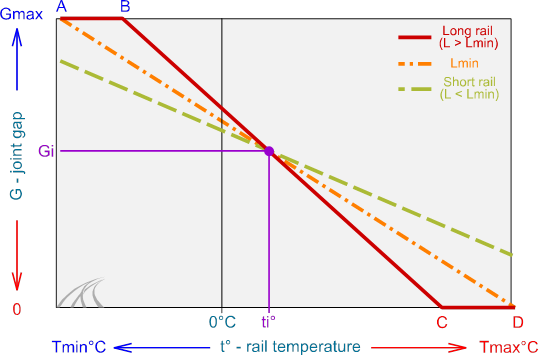 Any rail longer than Lmin, if installed correctly, the joint will close at  point C, before Tmax. If the temperature will increase further to Tmax, the rail cannot expand any longer and in the rail will appear and develop a thermal compressive stress.
Also, as the temperature decreases, the rail will open to Gmax at point B, before reaching Tmin. As the temperature goes down to Tmin, in the rail and joint will appear a thermal tension stress.
This type of rail length, in which the thermal stress will naturally appear during the annual temperature variance, is called long rail. The joint gap will have, for long rails, the variance shown in this animation:

Joint gap variance under the influence of rail temperature

On the sections AB and CD in the rail and joint there will be an axial stress – either tension or compression.

For the UK specific joints presented in the blog post mentioned earlier, the reference rail length Lmin is:

For all these flat-bottom (Vignole) British rail types, the reference rail length, Lmin, is of around 18.5 m.
Hence, for the joints defined by the above components and dimensions, a British standard 18.288 m (60 feet) rail is a short rail. We can notice also the correlation to the reference length Lmin implied by the British standards.

For temperate continental Europe the maximum rail gap is around 20 mm. Considering the equations above and the temperature range Tmax – Tmin = 90°C, this gives again a reference Lmin of 20 m. Any rail length longer than this is a long rail, if the joint is installed with the components that define the maximum gap used in the computation.

As we have seen here, dear reader, the definition for long and short rails is not providing rigid values as it depends on the components used to construct the mechanical joints. The rail is not long or short by itself but in direct relation with the joint components and dimensions, sometimes even in relation with the type of railway superstructure.