The relative position of  railway double or multiple adjacent lines is of critical importance for level crossings. On canted tracks, the road traffic is affected if the level crossing does not provide a good riding plane, especially for long vehicles or the (sometimes expensive) low profile ones. This is why the design of a railway track level crossing should be always an integrated one, merging the road and railway track disciplines to provide an optimum solution.

But this relative position of adjacent tracks is significant not only for level crossings, as a high level difference between the tracks might affect the long term dimensions and stability of the ballast shoulder – with direct implications on the CWR track lateral stability. This especially for the railway administrations with small standard track interval, that brings the ballast shoulder under the influence of the adjacent track.

If the tracks are not canted then the track coplanarity is ensured by designing the tracks at the same level. Hence, if there is a level difference between the tracks, ∆ₒ, that can be easily noticed in the design.

For canted tracks, designing the tracks to place the sixfoot rails at the same level (SLR) is creating a difference between the two planes of rail.

In this case the inner track, A, has the sixfoot ballast shoulder exposed. If the level difference ∆ is significant, this increases the risk of flattening the lateral support of the track.

This is the reason why, when presenting the relative position of adjacent tracks, the track design standards have the rules defined for the plane of rail difference and not for design level difference.

The UK track design and construction standard (NR/L2/TRK/2102), for the specifics of British railways, is imposing this difference in plane of rail between two adjacent tracks (on standard track interval) to be not greater than 150 mm and when this value can’t be achieved ballast retaining structures are required to maintain the ballast shoulder dimensions and stability. The standard has also a define rule if the track interval is wider.

If the track interval rails are at the same level then ∆, the difference  in plane of rail between the two tracks, can be computed based on the following figure:

If both sixfoot rails are at the same level (noted SRL in the drawings), the highlighted right triangles are similar.

∆, the level difference in plane of rail (PoR) between the two adjacent tracks A and B, can be computed with acceptable precision, using the triangle similarity:

For a standard set of data, the level difference ∆ will have the following values in relation to cant: 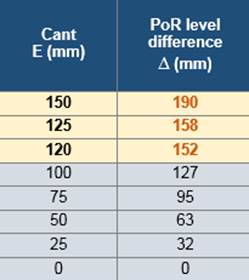 For a normal track interval, placing the sixfoot rails at the same level for a cant greater than 115 mm is already disobeying the standard rule of keeping a 150 mm maximum difference in plane of rail between the two tracks.

Another thing to note is that this rule of keeping maximum 150 mm between the planes of the two adjacent tracks can be considered safe for normal tracks and standard sleepers, for normal sleeper length ≈ 2500 mm. If this length is significantly different the rule must be reconsidered.

The coplanarity of adjacent tracks is of critical importance over the S&C area, where the overlapping track are usually required to be in the same plane – the one defined by the main line. If this mainline is not canted then the problem is simple – the vertical alignment of the diverging track needs to fit over the graded vertical element of the main line (through track). For most of the S&C layouts that will produce a faceted vertical alignment that can be usually simplified to a similar gradient as the through track.

If the through track is canted then the coplanarity requires a more complex computation; that is based on the same principle presented here.

This approach is precise enough for most of the railway track applications.

That would not be the case of complex S&C units for light rail or tramway track, when the requirement of fitting the design in a road layout (a roundabout for example) comes into place.

Join 319 other followers
My Tweets